It's hard these days to be a Freemason

It's hard these days to be a Freemason 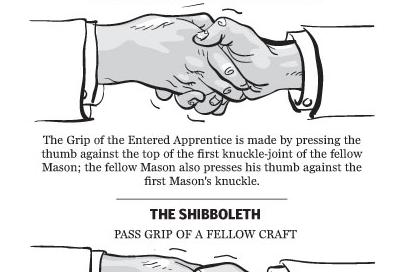 On the University of Toronto campus last Saturday night, a cadre of six or so angry anti-Masons armed themselves with video cameras, so-called "9/11 Truth" pamphlets and a lot of aggressive questions.

[After watching the clip this 'group' posted on YouTube I am convinced this was a PR stunt put on by the Freemasons, and that the 'anti's' were actually Masons themselves. As Mr. Ripley said... - FW]

Swarming near the entrance of the George Ignatieff Theatre, they were poised to intercept the Freemasons who hoped to join a meeting that would address their relevance to the modern world. Or perhaps, how they can take it over.

When I arrived at the doors, the protesters were browbeating an attendee who had stuck his head out to see what the protest was about. "Have you ever read this book?" a protester asked, waving a copy of Morals and Dogma in his face. "Do you obey it?"

Written by Southern mason and confederate-army general Albert Pike, the book is a putative tell-all about the Scottish Rite of Masonry, a classic of the conspiratorial canon.

Some members of the group -- otherwise known as the Craft -- will just tell you it's grossly misquoted, utterly antiquated or totally ignored.

"I haven't," the Mason said and walked away.

"He just isn't high up enough to know the truth," one of them said to his back.

Detractors call them a secret society. Freemasons call themselves a society with secrets.

For three centuries, Freemasons have held their secret meetings, worn their aprons, exchanged their grips --or knuckle-to-knuckle hand greetings -- and built a mystical life philosophy on the constructs of architecture.

Part of the mystique is the august membership, a staggering list that almost seems to sum up the march of modern history: numerous Canadian and British prime ministers, many U.S. presidents and senators. Jazz legends Duke Ellington and Oscar Peterson. Explorers such as Sir Richard Burton and Sir Ernest Shackleton. Food-chain king Colonel Saunders and Tim Horton.

In recent years, however, the 2.5 million Masons worldwide have faced the typical men's club quandaries: marriage, for one. What with all the responsibilities men have at home these days, they can't be out planning their conspiracies every night. (One seminar held last weekend was entitled, "How to tell your wife you're a Freemason. Free hint: include her in your Masonic studies!)

Retention is also a problem. In Ontario alone, 20,000 people join each year, the organizers say, but 20,000 leave. What is it about the Lodge that drives them away?

And with the drop in numbers, there is the other existential question: Do you let the ladies in?

David Sheen, a traditionalist kind of Mason who sits on a governing body called the board of general purposes, said the Masons shouldn't worry about relevance.

"No organization can be everything to anybody," said Mr. Sheen, the divisional chief for the Toronto Fire Services. "It has less validity if it bends and changes to whichever way the wind blows."

But all these problems might seem quaint next year, when one of the world's most commercially successful authors, Dan Brown, publishes the Solomon Key.

His previous novel, The Da Vinci Code, whose 60 million-plus copies sold made it one of the best-selling books of all time, is notorious for demonizing the powerful Catholic lay order Opus Dei.

Now he is training his sights on the Freemasons.

The novel's title is a reference to the Key of Solomon, a medieval book of occult practices erroneously attributed to King Solomon, and though its publishing date hasn't been confirmed, a cottage industry of conjecture has already sprung into action.

Two years ago, Greg Taylor published The Guide to Dan Brown's the Solomon Key and has been trailing clues left by Mr. Brown in the media. Accordingly, he predicts the novel will involve Masonry, take place in Washington, D.C., and will involve the murder of politicians in the capital.

Mr. Brown's art-historian and slick sleuth, Robert Langdon, will be the protagonist.

"Other aspects of the plot may involve the Masonic-like Skull and Bones society," Mr. Taylor wrote in an email. "Brown enjoys pointing out amazing conspiratorial facts, and one of the biggest from last year was that the opposing candidates for the Presidential election were part of the same secret society (Bush and Kerry)."

Mr. Sheen, the Toronto Mason, doesn't rue the inevitable bonanza of scrutiny that is bound to accompany the upcoming novel.

"I think it will be good for us," he said, echoing others at the meeting who support the any-publicity-is-good-publicity notion, keen to generate new interest in the organization.

Still, weathering the Dan Brown effect was not an easy challenge for Opus Dei, a conservative movement in the church that was largely unknown to the general public until the Da Vinci Code. The novel portrayed the membership as a cult-like, conniving and homicidal cabal.

Monsignor Frederick Dolan, Opus Dei's Vicar in Canada, said that at first, it wasn't easy being under the magnifying glass, and defending one's beliefs. But he learned to relax.

"In hindsight, it was a blast. I learned how to make lemonade out of lemons."

Before I was allowed to enter the theatre and find out about the plight of the Freemasons, the protestors asked me if I knew that George H.W. Bush was a Freemason and his son was a member of Yale University's secret society Skull & Bones.

Soon came the inevitable insights about 9/11: Guess who really planned it?

"Why are you here?" I finally asked. "What do you want out of this?"

"We're here to free the masons."

As I passed, I was handed a pamphlet that asked if Freemasons worshipped Satan, which had this caveat: "Most Masons do not worship Satan. But in the higher initiation degrees they all must participate in rituals such as drinking wine from a human skull whilst kneeling at a black altar with serpents in it."

While that particular rite was curiously absent, this gathering was a rare event. Hosted by the Toronto Society for Masonic Research, it permitted public participation; Master masons, the highest-ranking brothers, sat on the stage with uninitiated panelists, which is typically a no-no. Freemasons like to keep to themselves.

"It's not a scientific fact or anything, but I think this was unprecedented," said organizer Peter Renzland, a reform-minded member. During the discussions, Mr. Renzland was frustrated with the group's inability to answer the woman question head-on.

The 45-minute question period was tense and sombre. The 30-odd greying attendees couldn't agree on much.

At the end of the panel, I asked Mr. Sheen about the whole drinking-from-the-skull business.

"In all my years as a Freemason, I have never heard of such a thing."

And he said it with a straight face.